7 replies to this topic

About fifteen years ago one of my college professors co-wrote a novel based on the life of HH Holmes, America's first known serial killer. Holmes set up shop in Chicago during the World's Fair and leased apartments from a massive building he owned. He was a doctor and ran a pharmacy and was charged with over 20 murders, but is believed to have killed as many as 200 people. He preyed upon young woman coming to Chicago to work, and conned the elderly into taking out life insurance policies with him as the benefactor, then bumped them off. He was a sick f*ck.

A few years after my prof's book came out, Erik Larson published The Devil in the White City, about Holmes. Great book if you're into true crime. It's going to be movie soon. For all that's been written about Holmes, though, there aren't many pictures of "the castle," his hotel. It supposedly had secret entryways, rooms rigged up to gas tenants to death, a true death trap. In the basement Holmes did all his sick f*ckery. People say he inspired American Horror Story Hotel, but I think that hotel is based on the Cecil in LA.

Recently a woman, inspired by Larson's book, drew this illustration of a cross section of the "murder castle". 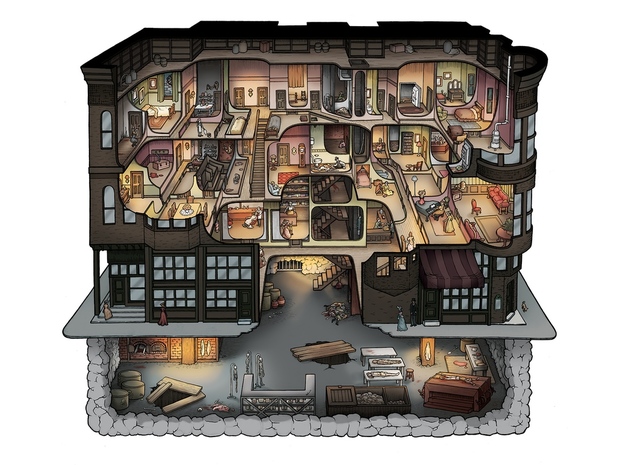 There are larger pics out there to see the details, but it's pretty Edward Gorey as is. She has a kickstarter out to turn it into a jigsaw puzzle.


They'll leave the light on for ya.

Srsly tho. I love true crime stories, especially serial killers. Thanks for the heads up.

I became of fan of Erik Larson because of 'Devil in the White City'. Truly one of the most chilling books I've ever read.

Blimey.  The closest English equivalent would be Dr Harold Shipman.

Googled this case last night. Wow. What a sick fucker.