24 replies to this topic

A couple of years ago I sneaked a collection of old negatives out of my Mum's house, and I've finally bought a decent negative scanner.

Here's a pic taken in 1953 of my Mum at the wheel of her Dad's car, in West Hartlepool where I was born seven years later. The girl on the right is my Aunt Audrey (her younger brother's wife). 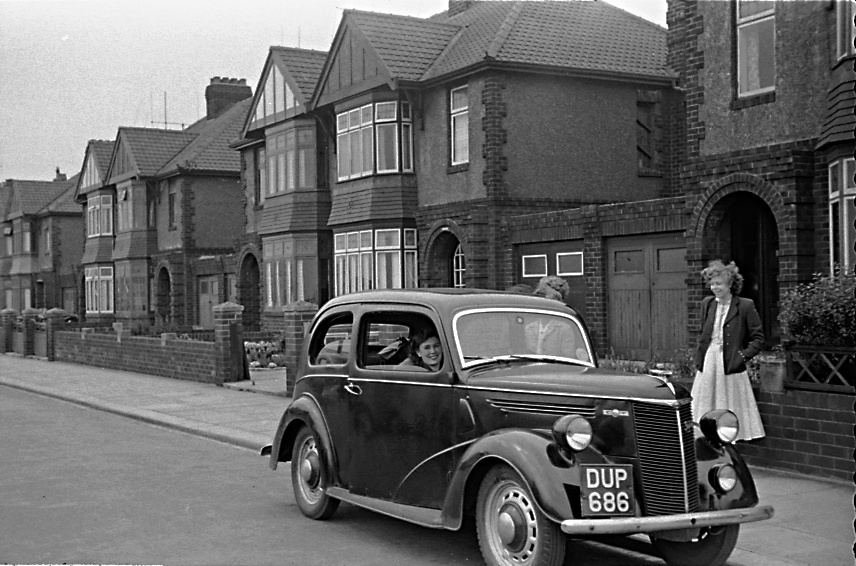 My brother and my Aunty Kay at the beach at Hartlepool, also in 1953 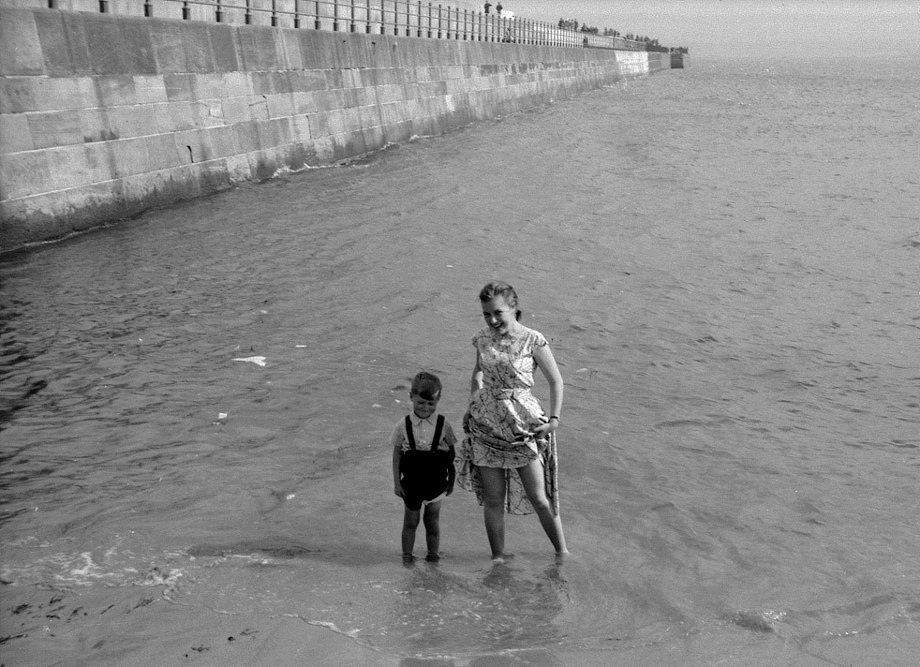 I once posted a photo of my grandfather as a young man of 18 or so here on the old CP. Actually since that's toast now, here it is again: 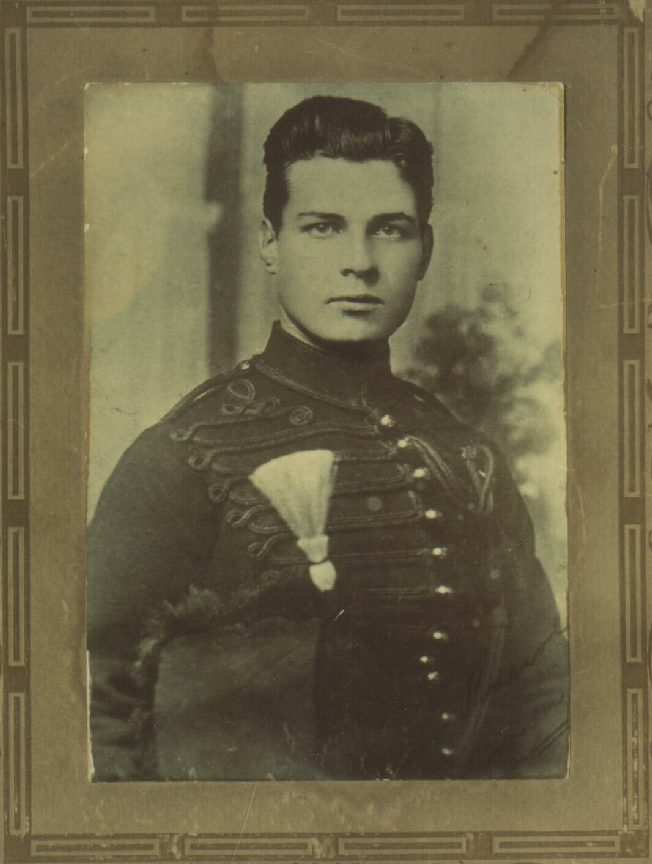 This was my Mum's dad. He died before I was born. When this photo was taken, he was in the Royal Horse Artillery. He was given the dress uniform pictured to take part in a recruitment tour. This involved a lot of charging around parks on horseback to encourage the lads who came to watch to join up.

He met my grandmother only months before going to India, and didn't see her again until he came back in 1926. They were married shortly afterwards. He was very disappointed to have missed out on the Great War. It was all done and dusted by the time he was old enough to go and fight.

I don't know if he met my other grandfather - I suppose he must have done. If he could have spoken to him about his time in the war, he wouldn't be sorry he'd missed out. 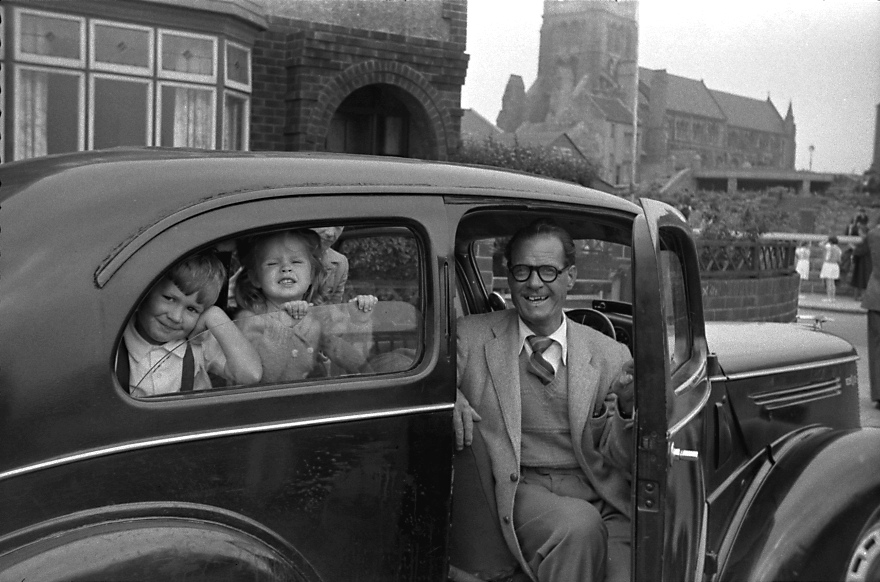 .. that's my older brother and one of my cousins in the back.

My Dad was a chief engineer in the Merchant Navy. This one was taken toward the end of his career at sea, in 1950 or so. After getting married, he took a job as a draughtsman at an engineering company in West Hartlepool, as it was then. 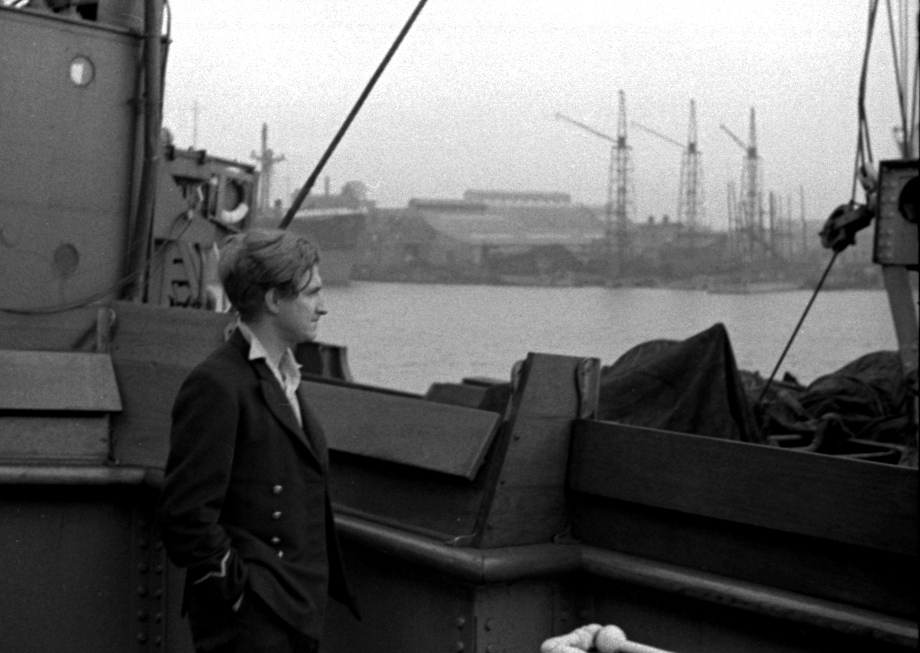 I once posted a photo of my grandfather as a young man of 18 or so here on the old CP. Actually since that's toast now, here it is again:

Great pictures but why does he have a shaving brush on the front of his uniform?

"We actually have not required in this law that you carry health insurance."

My mother leaves hospital with the first of her three sons, my brother Bill, in April 1950. She was 22. 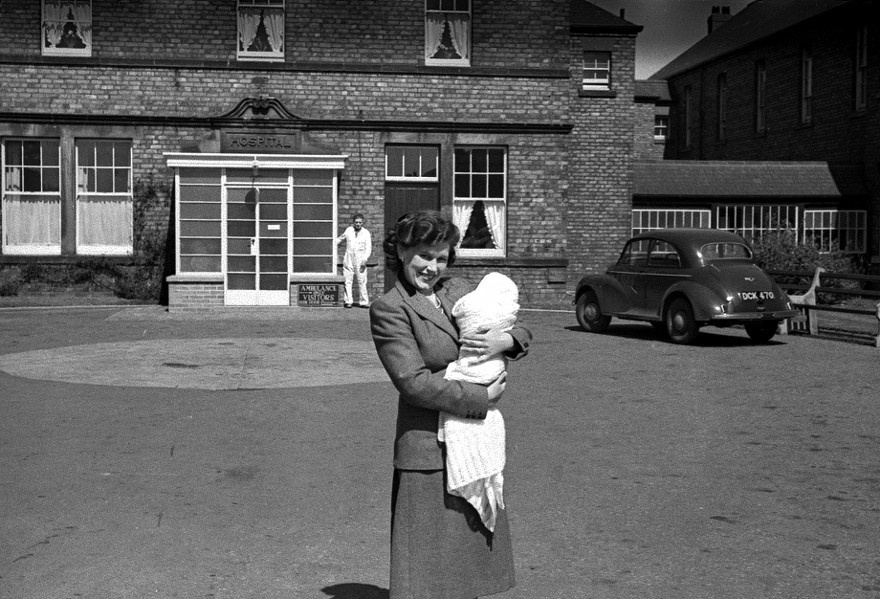 Nice pics.  Someone had an eye, no doubt.  My old family pics are badly out of focus or poorly composed.

Excellent pictures. I don't recall you ever talking about you having siblings before.

Thanks guys. Yes I have two brothers, one ten years older who can be seen as a child in some of these pics, and one four years younger. Here's Bill at the beach with his cousin Katie and his mum's cousin, David. Same age, but separated by a generation nonetheless. 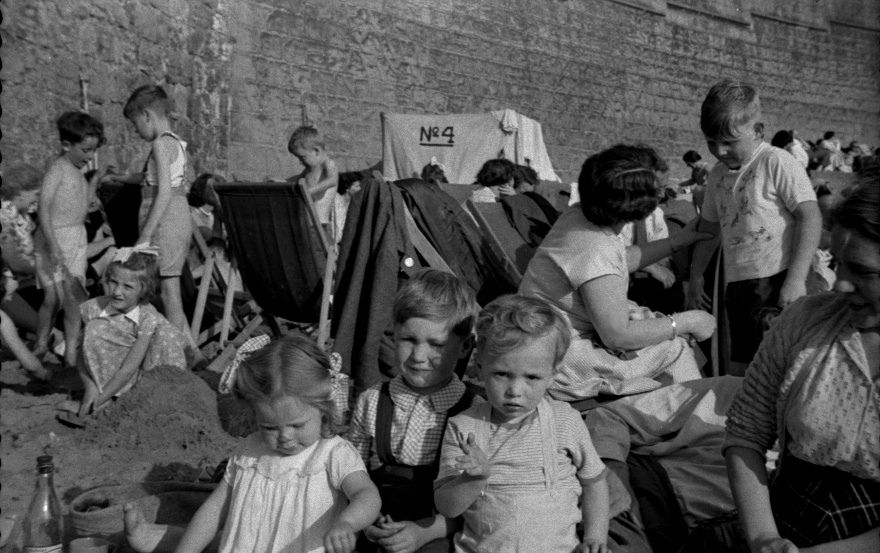 Looking at these pictures really shows how careful the people involved in Call The Midwife were to capture the look of the times.

The drawing office at Richardsons Westgarth, a marine engineering business where my Dad worked in the early ’50s.

My Mum and my Aunt Alwyn, probably in 1950 I think. They would both have been in their early '20s. Sadly Alwyn died of cancer in 1970, at the age of 42. I was only 10 when she died but I remember her well. As my cousin Katherine, her daughter, remarked recently: she had just half a life. 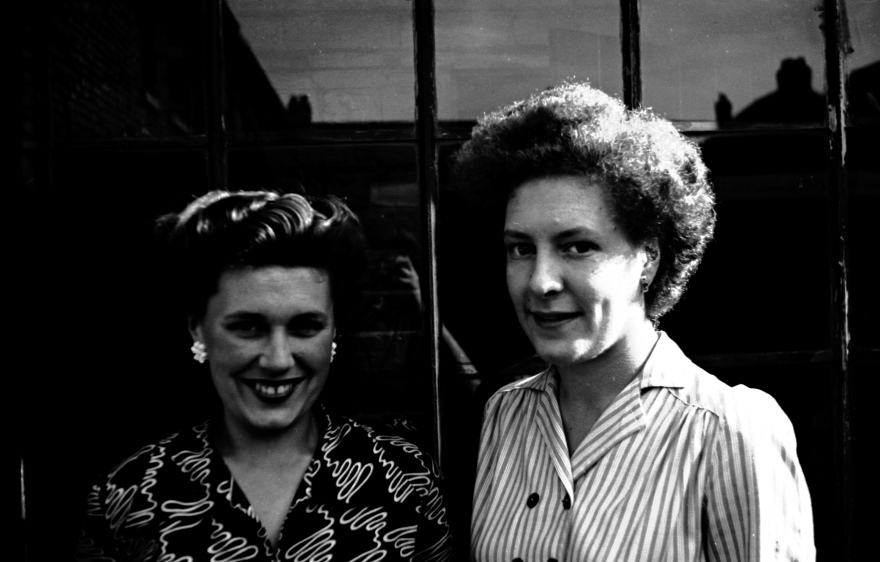 I inherited my Mum's gappy front teeth. But fortunately I also inherited my Dad's closed smile, so you can't usually tell.

Bill and cousin Katie at the fair on the Town Moor, 1953 I believe. This was quite badly underexposed. I've done my best to rescue it; haven't quite managed but it does have a certain charm so I'll post it here. 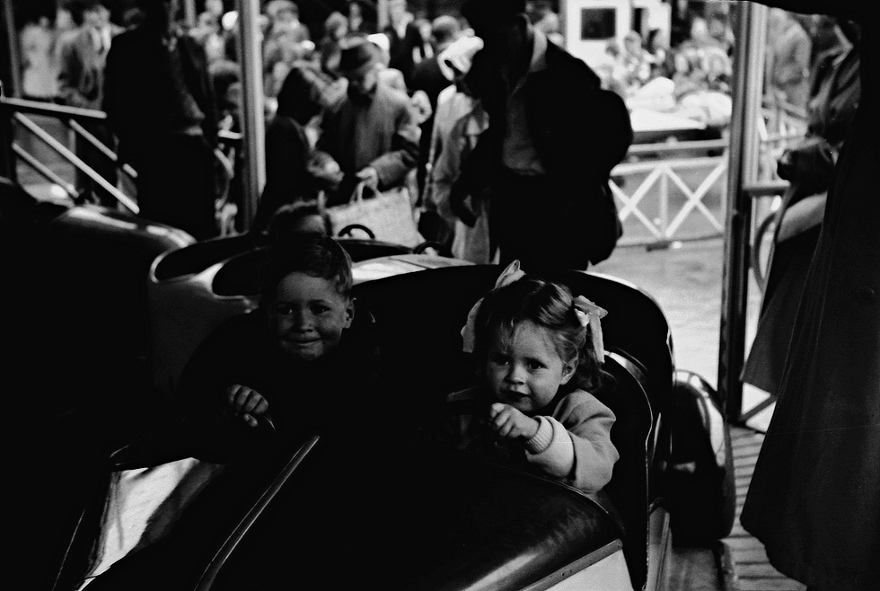 Uniquely of all my cousins, Katie is something of an enigma to me. I only remember meeting her about three times, I don't think I've seen her since the late '70s and we wouldn't recognise each other if we passed in the street.

My grandfather managed a furniture shop in Bishop Auckland, a small town in the North East of England. This was it. 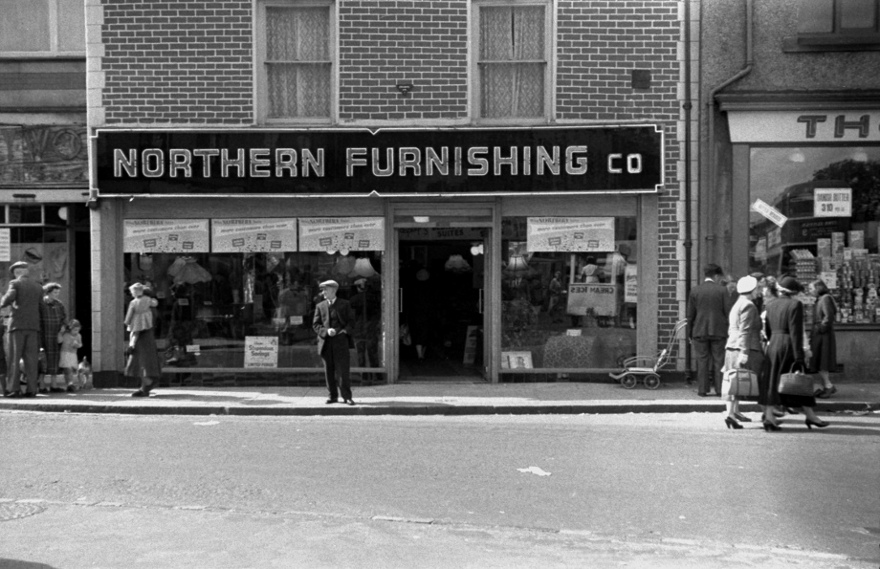 I didn't think it was possible to get nostalgic looking at someone else's black and white photographs. 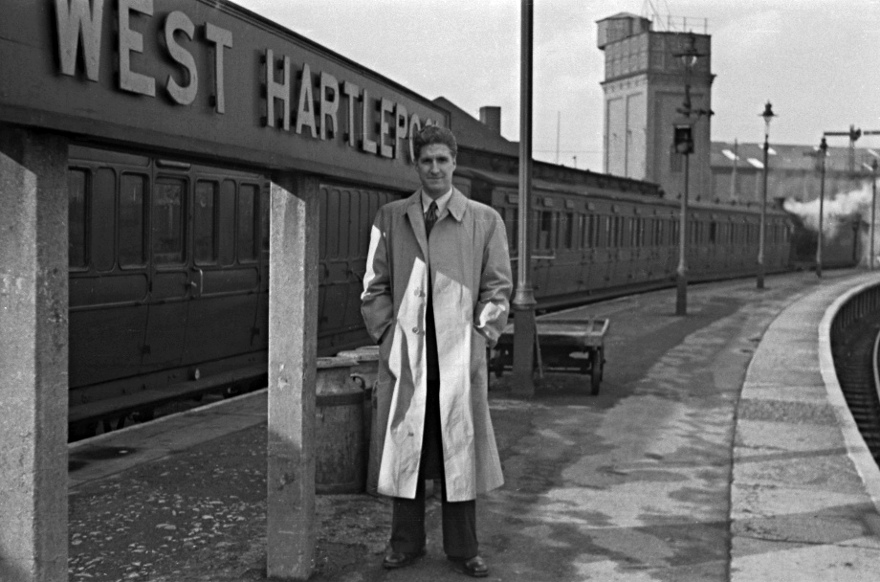 I didn't think it was possible to get nostalgic looking at someone else's black and white photographs.

Very much so. I suspect many of us have pictures from this era.